The Association of Dress Historians are launching an ADH Lecture & Conversation Series and have issued a Call For Submissions with a deadline of 1 October 2020 #textilehistory #dresshistory #callforsubmissionsWe are excited to announce the Call For Submissions for our new ADH Lecture & Conversation Series with a deadline of 1 October 2020, 23:59 GMT.

The aim of the ADH Lecture & Conversation Series is to provide a virtual space for ADH members to connect and share knowledge about dress history.

ADH Lectures will be approximately an hour long containing a 35-minute lecture, leaving up to 25 minutes of questions and discussions. ADH Conversations will be approximately 45 minutes long and will allow an opportunity for members to discuss recently published articles in The Journal of Dress History and/or discuss other dress history topics.

We look forward to your pitches!! ... See MoreSee Less

Save the date! This yearâ€™s Knitting History Forum Conference is once again confirmed as Saturday 7th November 2020. Further details will be available on the website as they are confirmed knittinghistory.co.uk/khfevents/knitting-history-forum-conference-2020/

The knitted silk waistcoat King Charles I wore during his execution will be displayed this Autumn as part of an exhibition on the history of public punishment in London. www.bbc.co.uk/news/education-51313498

'Executions' opens 16th October 2020 at the Museum of London. www.museumoflondon.org.uk/museum-london/whats-on/exhibitions/executions

Vest worn by Charles I at execution to be shown

A silk vest worn by the king at his beheading, usually not on public view, is to be shown by a museum.
View on Facebook
·Share

Itâ€™s a sad fact that after working with hundreds of examples of Shetland fine knitted lace over the years, it takes something very special to catch my eye.
View on Facebook
·Share

Knit like it's 1923! From 4th January to 29th February 2020 Dr Ellie Reed is leading a knit-along for this 'Distinctive Jumper' or sweater with a camel-and-tree motif border from a 1920s pattern in the collection of the Knitting & Crochet Guild (kcguild.org.uk/). Ellie presented a warmly-received paper at our Knitting History conference in 2018 and the knit-along ties into her research on knitting and crochet patterns in 1900-1949 domestic magazines. Follow the #camelsweater2020 KAL on Twitter @ViolaChasm, Instagram @drelliereed or join the knit-along Facebook group www.facebook.com/groups/2554930691403448/.

If you're researching an aspect of textile history but struggling to find funding, the Pasold Research Fund may be able to help #knittinghistory #knitting #crochethistory #crochet #textilehistory #academicresearch

Emily Whitted has won an award with her M.A. thesis "Made in Germantown: Production, Wear, and Repair of American Frame-Knit Stockings 1683-1830" (Germantown in Pennsylvania was a centre of the framework knitting industry in the US) #knittinghistory #knitting #textilehistory 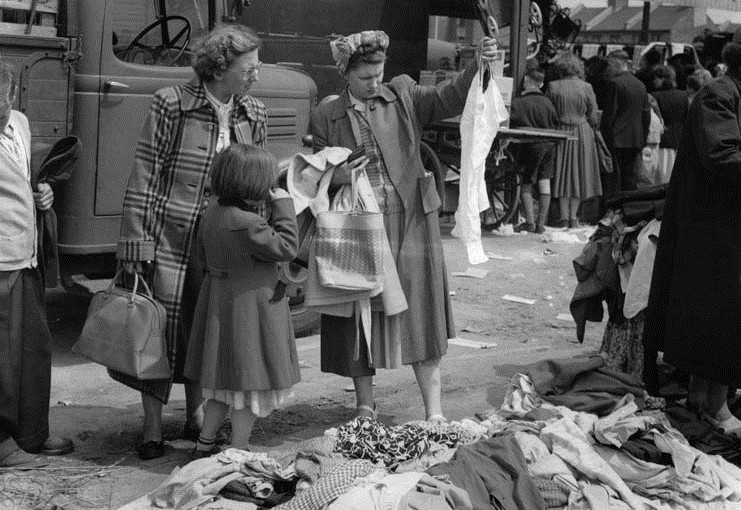 A Call for Papers has been issued for a two-day conference hosted by The Museum of London in September next year. ‘The Look of Austerity’ will “explore the effect of post-war austerity on the appearance of people and cities… ‘The Look of Austerity aims to re-examine the post-war period, looking at the changing meaning and the face of austerity and exploring the real implications of austerity policies and culture on sartorial aesthetics. Focusing on the immediate post-war period, specifically the years 1945-1951, we invite papers that examine the popular experience of obtaining and wearing clothes throughout the western world during these turbulent and changing times, exploring the often overlooked areas of ready-to-wear innovation, international dialogues, and approaches that look beyond some of the popular myths of post-war fashion.”

The conference will take place at the Museum of London, on Friday 11 and Saturday 12 September 2015. Presentations are invited of 20 to 25 minutes’ duration â€“ material culture and interdisciplinary contributions are particularly encouraged. Topics for discussion may include:

The effects of war did not end immediately in 1945. In Britain clothes rationing lasted until 1949 while rationing only ended altogether in 1954. The ‘Make Do And Mend’ mentality of the war years continued long after, as Europe began the slow process of rebuilding. Knitting played vital part in the budgets of many households and really should be represented appropriately by a paper at this conference. So put on your [knitted] thinking caps!

The deadline for submission of proposals is Monday 27 October 2014. Further information is on the Museum of London website, where you can also download a copy of the Call For Papers.