The Holy Hands research project by Dr Angharad Thomas and Lesley OŌĆÖConnell Edwards has been examining surviving early knitted liturgical gloves. Now the latest issue of The Journal of Dress History includes the article ŌĆśHoly Hands: Ceremonial Knitted Gloves for Elite Churchmen in Europe from the Twelfth to Nineteenth CenturiesŌĆÖ, by Lesley OŌĆÖConnell Edwards, discussing the Holy Hands research project, with extensive consideration of documentary evidence and technical analysis of the gloves themselves as well as reflecting on their makers. The Journal of Dress History is published by the The Association of Dress Historians and Volume 5, Issue 5 for Late Autumn 2021, is free to download at the ADH website dresshistorians.org/journal/ . It's easy to find as the cover features a detail of a knitted silk glove c1550-1570 from The Cathedral Museum in Uppsala, Sweden.Lesley will be speaking at the online Knitting History Forum Conference on Sat 13 Nov 2021. Book your ticket online via www.eventbrite.co.uk/e/khf-online-conference-2021-heads-hands-feet-tickets-181878713127. A programme and further details are available at the Knitting History website knittinghistory.co.uk/events/knitting-history-forum-conference-2021-heads-hands-feet/#knittinghistory #knitting #textilehistory #dresshistory #materialculture #churchhistory #historyofknitting #gloveknitting #knittedgloves #khfconference2021 #khfconference ... See MoreSee Less

Still considering presenting a paper online at the Knitting History Forum Conference in November 2021? KHF welcomes original research papers from contributors around the world on items such as knitted hats, caps, bonnets, gloves, stockings or shoes, from any culture and within any historical period up to the end of the 19th Century. Why not put your thinking cap on this weekend and submit an extended abstract of between 1200 and 1400 words to KHF chair Prof Sandy Black on s.black@fashion.arts.ac.uk? The deadline of Wednesday 30 June is just days away.knittinghistory.co.uk/events/cfp-knitting-history-forum-conference-2021/ #knittinghistory #knitting #textilehistory #CFP #CallForPapers ... See MoreSee Less

­¤Ü© Call for blog posts! ­¤Ü© We are delighted to announce our call for blog posts for the 2021/22 academic year. Our theme this year is 'In the Margins', which focuses on marginalised areas of history. Please share widely! (DM for text version) 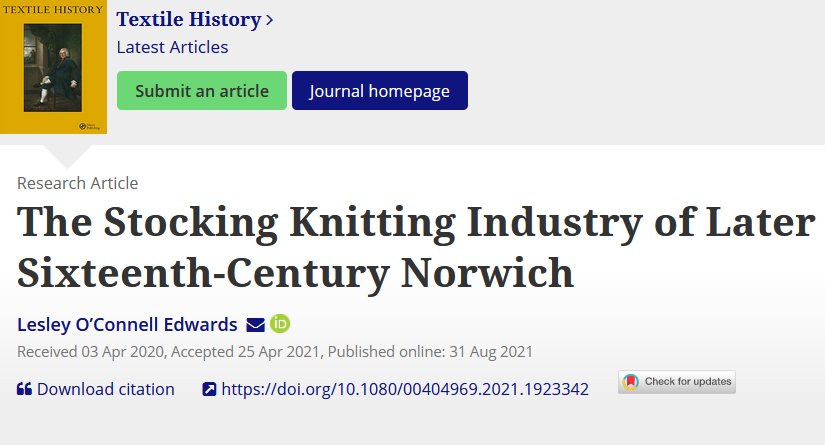 Elizabethan knitting is the subject of a newly-published article in the journal ‘Textile History’. Lesley O’Connell Edwards’s paper is entitled ‘The Stocking Knitting Industry of Later Sixteenth-Century Norwich‘ and its focus is a subject with popular interest but surprisingly little academic investigation. As the abstract explains: “Knitted garments became increasingly common throughout the sixteenth century in England, and it has been estimated that the production of stockings alone occupied at least 90,000 knitters at the end of the century. Knitting as an economic process in England has been little studied in this period. This paper examines the evidence for knitting as an industry in the later sixteenth century in Norwich, the second city in England, when it provided a source of employment for over seven per cent of the poorest people. It provides quantitative data for the socio-economic background of knitters in the 1570s, and for the minimum volume of production in the early 1580s. It analyses other evidence for this industry, including the production process and contemporary writings.”

Lesley, a long-standing member of KHF, has presented well-received papers at previous Knitting History conferences. She maintains the invaluable Bibliography Of The History Of Knitting Before 1600 and has published other pieces on early knitting, some of which are included in KHF’s select Knitting History Reading List. This latest work, which includes material from her recent masters’ dissertation, is based on her ongoing research into sixteenth century knitting. Textile History is a peer-reviewed journal published on behalf of the Pasold Research Fund. Lesley’s article is available by subscription at the Textile History website https://www.tandfonline.com/doi/full/10.1080/00404969.2021.1923342?