Tomorrow, Monday 7 June 2021 at 15:00 (British Summer Time), Dr Jane Malcolm-Davies will deliver a paper entitled 'Slow Seeing and Fast Forensics: The Usefulness of Radiocarbon Dating Early Modern Materials, 1450-1650', as part of The Association of Dress Historians New Research in Dress History Conference. Jane's presentation will report on the results of her pilot study of early knitted items through radiocarbon dating, a method of establishing the age of organic matter by measuring carbon-14, a radioactive isotope of carbon.Conference tickets cost ÂŁ25 for ADH members, ÂŁ40 for non-members and ÂŁ30 for students with a booking fee. Book online and download the conference schedule and conference programme by visiting the Association of Dress Historians website at dresshistorians.org/june2021conference/ #knittinghistory #knitting #textilehistory #materialculture #dresshistory #fashionhistory #costumehistory ... See MoreSee Less
View on Facebook
· Share

The Italian Museum of LA seeks needlework with a story behind/about it, made by Italians or Italian Americans, for an upcoming exhibition. Theyâ€™re interested in all kinds of needlework, including knitting and crochet.
â€˘
#NeedleworkExhibition #ItalianNeedlework #ItalianAmerican 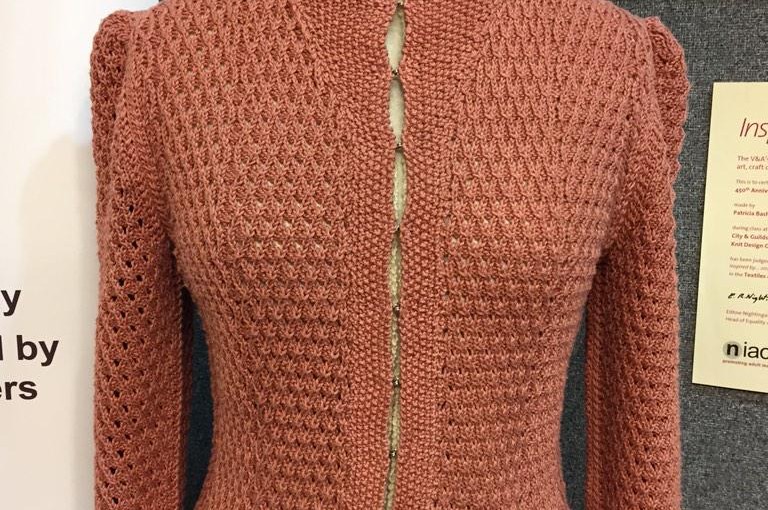 The 450th Anniversary Jacket was recently displayed on theÂ KCG stand at the Creative Crafts Show in Esher.Â It was knitted by KHF Treasurer and Membership Secretary, Tricia Basham, as part of her City & Guilds in Hand Knit Textiles.

Designed to tie-in with the 450th anniversary celebrations at the school where she then worked,Â this exquisite jacket was influenced by seventeenth-century textiles in the V&A collection, winning the V&A’s “Inspired by…” Fashion and Textiles Prize in 2012.

The photo of the 450th Anniversary Jacket on the KCG stand was taken by Emma Vining, another Knitting History Forum member and supporter whose knitwear design just made the cover of The Knitter again.