Call for Papers: Knitting History Forum Conference Saturday 13th November 2021 â€“ Heads, Hands and FeetFor this yearâ€™s Knitting History Forum conference we are calling for contributions on the theme of 'Heads, Hands and Feet'. As evidenced by the earliest artefacts that survive in museums and collections, much of the historical practice of knitting created coverings for the extremities of the human body, due to knittingâ€™s flexibility, warmth and capacity for complex three-dimensional shaping.We are inviting original research papers that focus on items such as knitted hats, caps, bonnets, gloves, stockings or shoes, within any historical period up the end of the 19th Century. Papers may examine any aspect of knitting history such as design and technical construction, materials, provenance and trade, social context or economic aspects related to the production and consumption of knitted artefacts. This list is not exhaustive so do feel free to propose other areas.Please submit an extended abstract of between 1200 and 1400 words to the KHF chair Prof Sandy Black on s.black@fashion.arts.ac.uk by the deadline of 30th June. All abstracts will be reviewed by a selection committee and decisions notified by 5th August. Contributors will be invited to present for maximum 20 minutes plus 5 minutes Q&A, and abstracts will be published on the Knitting History website (knittinghistory.co.uk/).The 2021 conference will be extended to a full day, and will take place online on Saturday 13th November with the Knitting History Forum AGM in the afternoon of Friday 12th November.knittinghistory.co.uk/events/cfp-knitting-history-forum-conference-2021/#knittinghistory #knitting #textilehistory #CFP ... See MoreSee Less
View on Facebook
· Share

April may have been the cruellest month in T. S. Eliotâ€™s eyes, but for many in the continuing COVID pandemic, January 2021 is far worse. Here is some good news to help KHF members keep going:...
View on Facebook
· Share

Un-Convention 2020 is the Knitting & Crochet Guildâ€™s first virtual convention. Running from this Wednesday 9th September to Tuesday 15th September 2020, the convention has a broad range of free events across the seven-day schedule, including speakers familiar from KHF conferences. Videos with closed captions (subtitles) will be available on Youtube and you can also join in on the Guildâ€™s Facebook group, Ravelry KCG or follow the hashtag #unconventionkcg on Instagram. Visit the Un-convention 2020 website to see the exciting programme in full unconvention.kcguild.org.uk/un-convention ... See MoreSee Less

#NewResearchFestival Our New Research in Dress History conference will be hosted virtually via zoom, 7-13 June 2021.

Todayâ€™s posts will feature the first panel of speakers. The full programme and ticket information can be found here: https://dresshistorians.org/june2021conference/

We have just launched our new website! https://fleecetofashion.gla.ac.uk/ will be updated throughout the course of the project. And our latest blog describes the Curatorsâ€™ Colloquium (Jan 2021) with answers to the questions prompted by the great presentations.

Cecilia Nelson-Hurt and Darci Kern talk to TODAYâ€™s Al Roker about the important role knitting plays in their lives and how theyâ€™re promoting diversity within their knitting community. @Dorcasstories @KCGCollection

BOOK NOW! Join us at the Stitching Together Study Day, Thu 13 May, 9-10.30am / 2-4pm / 7-8.30pm BST. A free online event for people with interests in participatory textile making activities â€“ participants, facilitators, researchers and commissioners! https://www.eventbrite.co.uk/e/stitching-together-study-day-tickets-150147508239 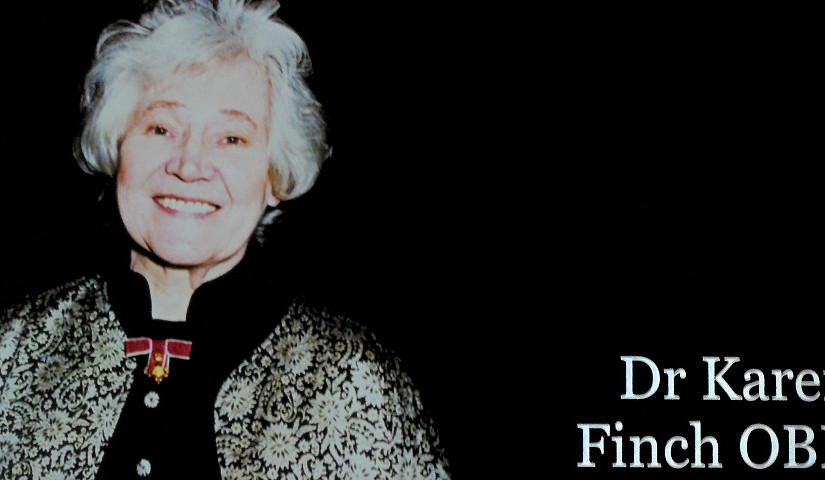 From 2006 to 2018, Dr Karen Finch (OBE, D.Litt, FIIC, FRSA) was Honorary President of the Knitting History Forum. As textile conservator and specialist, Dr Finchâ€™s warm personality and depth of knowledge enlivened early meetings. She delivered a paper on Needle Knitting in 1996 and spoke again in 2006 on archaeological finds from Copenhagen. Kirstie Buckland, a founding KHF member and herself an authority on early knitting, visited Karen at her home in summer 2015:

Karen Finch was born to a farming family in Denmark in 1921. She trained as a weaver and textile specialist, then married Norman Finch and moved to England in 1945. Here she quickly established her authority through the Royal School of Needlework and the V&A, voicing her concern about the lack of proper scientific conservation methods for vulnerable textiles. She began holding training classes for conservators in their beautiful house in Ealing but these classes quickly outgrew the house and in 1975 premises in Hampton Court Palace were secured for this purpose and the Textile Conservation Centre (TCC) took shape, culminating in purpose-built studios being attached to Winchester School of Art.

Dr Finch was the founder and first Principal of the TCC, known, respected and admired worldwide. Her contribution over the subsequent forty years was marked this summer by a ceremony when a unique volume of comments, extracts and pictures compiled by some of those conservators was presented to her. We are fortunate that at my suggestion to re-establish the former Early Knitting History Group (1993-2006), Karen immediately agreed to stand for President and was unanimously elected to that position at our inaugural meeting.

She is still greatly loved by her many friends, amongst whom I hope I can be counted. We first met over a Grenadier cap in 1975, and have since shared a lot of information and fun. Karen now lives with her daughter and family in Walthamstow where her spirit and sense of humour continues to engage all who go there.

Karen sadly passed away in 2018. Visit the Karen Finch Textiles website to learn more about Karen, her life and her legacy and explore the archives of her pioneering work.

All photos courtesy of Kirstie Buckland.