Female students at the Ackworth School also knitted stockings - 339 pairs in 1821! - and excelled at sewing, embroidery and other forms of needlework too. #knittinghistory #knitting #textilehistory #materialculture 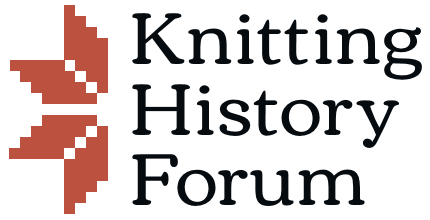 At our previous AGM in 2019, Kirstie Buckland generously presented a pair of gloves which our Chair, Sandy Black, accepted on behalf of Knitting History Forum. The distinctive black and white knitted gloves will be familiar to long-term KHF members and supporters as we frequently use an image of one of the gloves on our website and social media. Kirstie has kindly written a little more about these very special gloves and their significance.

When discussing the Castle Howard sock we once talked of having a section for ‘knitting myths’ to share some of the funnier ones. However, such myths should not be confused with symbolism and its roots.

Many KHF notices appear beneath a photograph of a single Sanquhar glove knitted in the ‘Duke’ pattern.

At the last AGM I donated these gloves to the KHF as a symbol of our connection with the aspirations of the Early Knitting History Group (EKHG) on which we were founded. They were made for me by Alison Thomson, the wife of the former vicar of Sanquhar and we had replaced the traditional date, which was worked into one wrist, with the EKHG initials. My initials are on the other glove.

The history and symbolism of Sanquhar knitting is well recorded:- http://www.futuremuseum.co.uk/collections/life-work/key-industries/textiles/sanquhar-knitting.aspx, and in Richard Rutt’s ‘History of Handknitting’, pages 199-202.

The gloves give us links with our group’s history, with British textile history, with Montse Stanley’s KRL* and with our loyal supporters. I hope that others will supply or suggest their own items, pictures or stories of direct significance to KHF to inspire and continue the achievements and independence on which we were founded. It would provide somewhere interesting to direct old friends and potential members who ask what we are doing.

Meanwhile Australians are being asked to knit pouches to comfort baby marsupials orphaned by their tragic bush fires, a new challenge for knitting.

* In 1999 the collection of EKHG co-founder Montse Stanley, including the Montse Stanley Knitting Reference Library, was acquired by the University of Southampton Library. Further information is available here: https://www.southampton.ac.uk/intheloop/knitting-reference-library.page